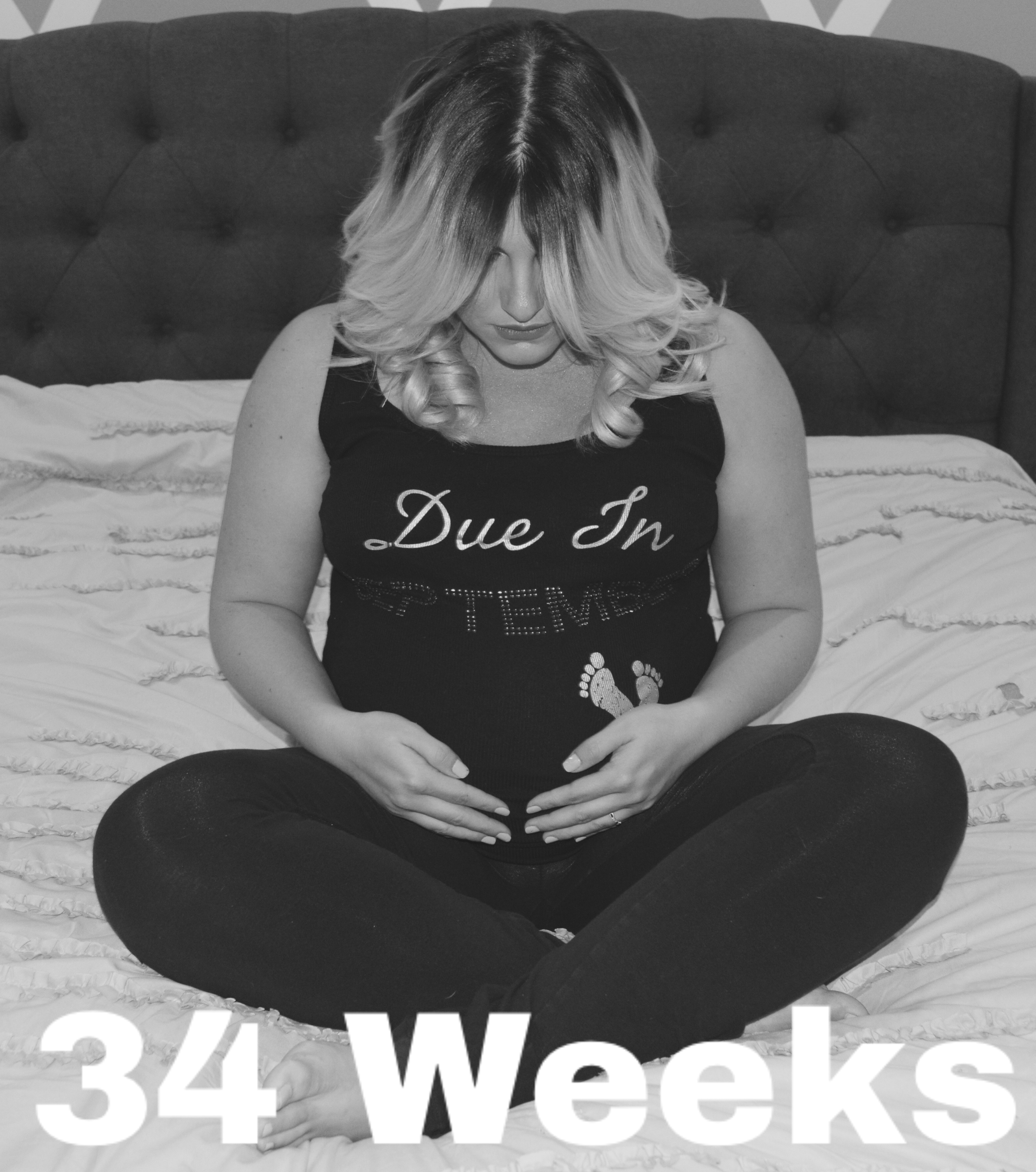 I finally hit 34 weeks today which technically means I have 3 weeks left until I reach 37 weeks and can have a fully cooked baby! EEEEK! He’s almost here! I know most first time moms come late so I am prepared for that even though my whole family thinks he will be here early. Let’s see, only God knows. 🙂

This past Monday, I finished my birth classes which I really enjoyed. I learned so much. I really feel prepared now, mentally and physically I think. 🙂 We all have a birth plan and we want it to go as planned, but I learned that we have to be opened minded because anything can happen so we shouldn’t over think it. My birth plan is to have a home water birth with the Midwives of NJ. It’s what I’ve always wanted, but I am open to what may happen. Maybe I won’t have the baby in the actual tub and that’s ok. The reason for me choosing a home birth is because, first, I don’t like hospitals, and second, when you’re in the hospital there is more of a chance of intervention. Having a midwife though actually really helps because they do become your advocate and they discuss everything with you prior to making “that” decision. You can still have a natural water birth or non water birth in the hospital with a midwife. (They basically replace your OBGYN.) Some people are not very familiar with how they work but I will say, it has been a great experience thus far. There is a lot more care involved, they are precautious with everything, they worry about your health and your baby’s health and most importantly they are there for you. The cool part is that most insurances cover home birth and midwives as your care providers which most people don’t realize. AND it’s so much more affordable believe it or not.

If you live in NJ and you’re interested in checking them out, go to www.midwivesofNJ.com to learn more! It’s worth taking a glance.

I know most people freak out when you say you’re having a home birth, but I honestly don’t let it get to me. If you educate yourself on the process of home birth and how safe it really is, you wouldn’t think it’s a bad idea. Everyone is entitled to their own opinion, just like some women go straight to a C- section as their first choice because they think its better because they don’t feel the pain. To me, that sounds more scary than a natural birth so like I said, everyone feels a certain way and that’s ok. You have to do what’s best for you and it’s not fair to judge others because of it. It doesn’t make you a bad mom or a better mom, depending on what type of birth you have. The most important thing is that you get the baby out safely.
If you’re looking for some resources on natural home birth or water birth, the main thing that made me want to do a home birth was watching the documentary called: The Business of Being Born. Even if you’re totally against home birth you should really watch it. It is a great educational film. It really opened my eyes to the way this country treats women and their right to birth. I mean, you already know we’re like the only country in the world that doesn’t have industrialized paid maternity leave and if your job offers maternity leave, you’re lucky to even get a part of your salary AND you’re even more lucky if it’s longer than 6 weeks. That already says a lot about how women are treated here so think about it in the birth aspect too. You have to educate yourself and do your own research– it’s out there and it’s worth learning about.

It’s so funny because this is obviously my first time being pregnant and people are constantly trying to give you advice and it’s totally normal and some of it is great but most of it is annoying and unnecessary. We’ve all been there. I for one have done plenty of research on EVERYTHING from pregnancy, to labor, to birth, to having the baby the first year and breast feeding, and on how to properly latch your baby, different positions for better latching….etc. I know my shit. Pardon my french. I really do, so before you assume things and get all crazy telling me how I shouldn’t do this or that, calm down.

I’m not saying I know everything because I definitely don’t, but I think I know a lot more than I probably should at this point. That being said, what works for one baby may not work for another and vice versa so no matter how much knowledge you have, it doesn’t even matter because it might not even work for me or you. What I love about social media these days though is that there are so many mommy groups and forums that you can have open discussions about your issues and concerns which is really helpful for many women and I love that! It’s nice to feel we are not alone.

I hope that no one takes any of this the wrong way, you know I like to put it all out there. The point is that you have the right to do what you believe is best for you and your baby and sometimes some moms make other moms feel bad about their decisions and second guess themselves and I feel like that’s not fair. I have so many friends who have told me, so and so told me this and now I am not sure what to do. Well, my answer is, do what you think is best to do and if you like the other person’s recommendation do some research on it and maybe it will change your mind and if you still feel strongly about your decision then don’t feel bad…just do it. I can’t tell you how many people have actually tried to scare me about home birth. It’s horrible, stop it. Don’t do that to anyone, it’s mean. No matter how strongly you feel about it, it’s not fair to make someone feel like they are making the wrong decision. It’s all in God’s hands. He is our creator and he has blessed us with these wonderful babies and he made women’s bodies capable of giving birth. We are MADE to do this, so we CAN do this. So let’s DO this together and not bring each other down!

Well, hopefully this was interesting to you and if anyone has had a home birth, I’d love to hear about it! Hopefully next time I update I will have my maternity shoot pictures up! I am so excited about them–can’t wait to share them with you! 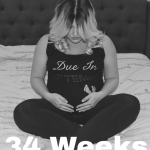 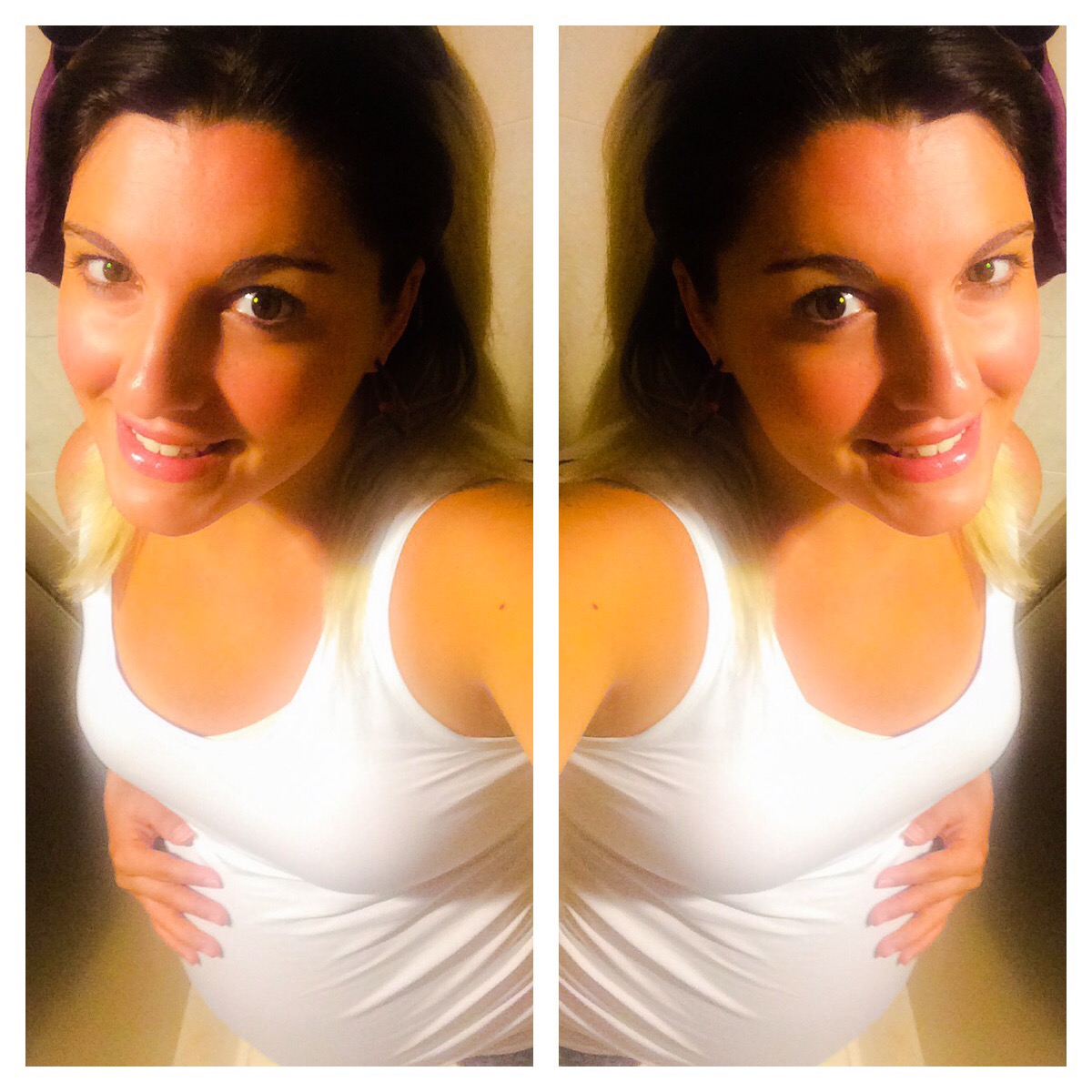 Hey all! So here I am, 31 weeks and 5 days pregnant. I have 8 weeks and 2 days left!  It’s beginning to all feel like a blur–just counting down the weeks, finishing up the nursery, getting all the shower gifts together, and organizing everything. The anticipation is starting to run through my veins. I am starting to get nervous, but I’m super excited to meet my baby Ezra. <3

In the last few weeks though there have been some ups and downs. If you’ve been pregnant you know that they have to test you for gestational diabetes and I don’t know why but I was really nervous about it. I took the first test, which typically you would fast after midnight until your blood test in the morning and they make you drink the yucky syrupy juice full of sugar and then they draw your blood. Luckily, my midwives didn’t make me drink that– they had me eat a specific breakfast: 2 pieces of toast w/butter, 2 eggs,  1/2 a cup of orange juice and 1 cup of milk. Then they drew my blood but I also still had to fast after midnight.

2 weeks later, right before 4th of July weekend, I got a call from my midwife telling me I failed the test by 2 points. 🙁 Needless to say, I was pretty bummed all weekend; filled with high emotions. When Monday finally came around, it was time to do my 2nd test. Those of you that don’t know, when you fail your first gestational diabetes test you have to take the famous 3 hour test which I will say is absolute torture. First, you have to fast from midnight on, and then when you arrive they draw your blood right away. Then they make you drink that nasty syrupy juice that I was lucky to avoid the first time. It tastes like Kool Aide mixed with a gallon of sugar–so sweet it’s disgusting ESPECIALLY after not eating for 10 hours, that’s not the first thing you want to put in your mouth. From then on, they draw your blood every three hours. You feel your blood sugar peak and it makes you feel like you’re going to pass out because your heart is racing and you’re actually starving. Then as your sugar drops you feel queasy and nauseated but its almost over at that point. The good thing about this test is that it didn’t take 2 weeks to get my results like the last one, it only took about 2 days.

Finally, the day came and my midwife told me that I barely passed the test. Barely passing is still somewhat failing really. I mean it depends on how you look at it. Technically, according to my lab results I passed but according to my midwife she didn’t think it was something we could move on from and ignore. In this case to be safe,  she thought it would still be a good idea to test my glucose levels everyday, 4xs a day while following a special diet. She said as long as my levels are normal on the regular I can continue as usual with a normal birth which ultimatley was the best news ever! I was so happy to hear that and I am doing everything possible to follow my diet restrictions to get the home birth I have always wanted.

Some background on gestational diabetes: If you are diagnosed with gestational diabetes you run the risk of preterm labor and having to be induced. Also, your placenta can die and obviously it would prevent you from being able to provide nutrients for your baby and there are a lot of other very sad things that can happen so it’s EXTREMELY important that you follow these restrictions because its the safest thing for you and the baby. It might be annoying at first, but the end result is a safe pregnancy and a safe baby coming into this world. Even though I technically don’t have gestational diabetes I am acting as if I do to ultimately be at my healthiest safest level of pregnancy.

I’d like to hear about some other experiences with gestational diabetes or “barely passing” gestational diabetes. How did you feel? Were you as scared as I was? I hope that sharing my experience would shed some light on some people and help you cope. It’s definitely not easy, just another thing to add to your pregnancy stress for sure but focus on the end goal! 🙂 You can make it through!

Other than that, everything else has been great, besides the typical heart burn, gas, clumsiness, forgetfulness, restless leg syndrome, waking up in the middle of the night, peeing every 1/2 hour, swelling and moodiness. 🙂 Life is good.